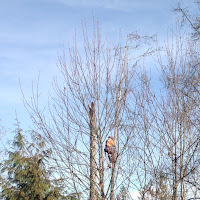 It's been slow but busy around here this past week or so ... slow on the ttwd front but busy with the rest of our life. Spring is a happening time in our rural world. Frank is the outdoor guy and he always has a mile long list of to-do's. Right now, its time to do a bit of logging. We have a wood stove to assist with winter heating so wood needs to be brought in every year. The last few years we've been cutting some of our own trees in our little 1/2 acre forest. We've been targeting the maples and alders which grow like weeds and can become a danger as they age. We hire a professional tree faller and Frank helps him with the bucking up of the downed trees and chipping of branches. Later will come splitting and stacking which I will help with.

Frank handles physical labour fairly well for a 67 yr old, but on the other hand, by the end of the day, he is down for the count. Tonight he is again snoozing in his favourite chair while I'm in mine next to him, reading blogs, thinking I am due to write a post. Also, me reading what other people are thinking often leads to me overthinking but what the hey ... it's a slow night so let's run with it.

We both agree we don't do punishment spankings and we've also found there is hardly ever any need for discipline spankings. I rarely if ever break rules in a way that requires a spanking ... I'm not saying this will always be the case ... but so far there has only been one spanking that could be considered a discipline spanking. Like I said in my Colouring Inside the Lines post, given a framework of accountability, I do pretty well keeping my crayons inside those lines. 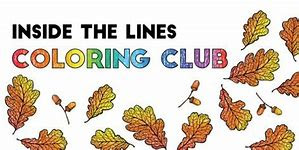 One of the main reasons we ventured down this ttwd road was a desire to see if DD was a way for us to bring our bedroom D/s dynamic into our mainstream life. In looking back from our late January start to where we are now, nearly 3 months later, I can say ttwd/DD has allowed us to do that. It has given me way to be Frank's submissive in our whole life but still be a version of myself I am comfortable with (although Frank will say I'm an improved version of my former self ;)). The rules and guidelines we agreed to are fairly simple and their intention is to smooth out our life together, making it more organized, calm and deeply loving. 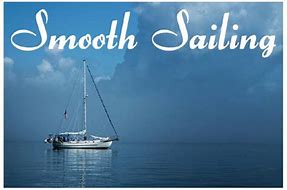 We agree he is the HoH for us (btw, have I mentioned how much he is enjoying his new role! :>)) 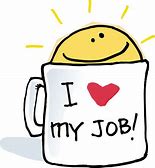 and I am so happy to have him as my always Dominant. He is as always, caring, loving and supportive but now we can add stern to the mix ... in an early post I talked about 'the look' and how it affected me the first time he did it (with him unaware that he was doing it) ... Well, now he is very much aware and when he gives me 'the look' - it stops me in my tracks!

So where does the spanking come in? 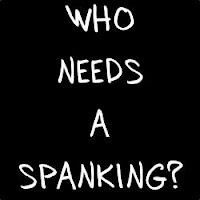 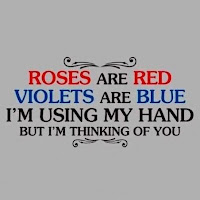 On the other hand, we have discovered Frank is the real Spanko in this duo. He loooves spanking me! ... most often bare handed, over his lap in bed (mornings), or bent over or on said bed (any other time of day), with his beloved spanking lingerie (on me, not him ;)), framing his target in a variety of ways. He also swats occasionally ... and the bugger also bum pinches - ouch! He misses spanking me if a day goes by without it happening. Definitely a Spanko man!


So, with deep thinking concluded, I can now say, in our former bedroom D/s world, spanking was one item on the menu ... most often a dessert item, something to be savoured as a treat. For me, as of now ... I see spanking has become the delicious appetizer to the main course, that main course being a deepening relationship and some of the best loving and sex we've ever had. 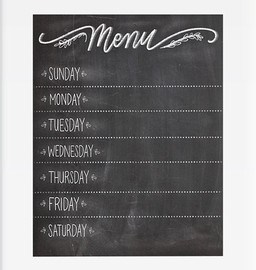 ... but this is our today version of this new ttwd life of ours and as many of you out there have told us ... it's an ever evolving world ...

thanks for stopping by ... nj

By NoraJean at April 22, 2018 12 comments:
Email ThisBlogThis!Share to TwitterShare to FacebookShare to Pinterest

... when your HoH decides a change in attitude is required ... 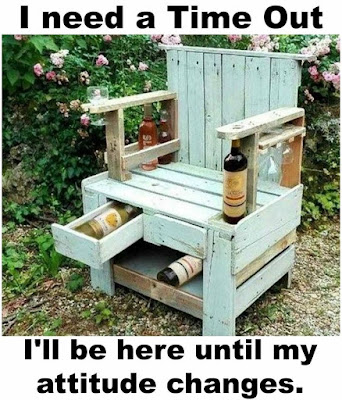 Happy Thursday, everyone! ... nj
By NoraJean at April 12, 2018 10 comments:
Email ThisBlogThis!Share to TwitterShare to FacebookShare to Pinterest

Not Just Another Bandwagon

This post will most likely resonate more with ttwd folks like ourselves, those stumbling around in newbie land ... but as usual, comments are welcome from all :>))

When Frank and I first agreed the end of January, to make
this lifestyle change to ttwd/DD, his biggest concern was that he would commit (and trust me, he was eager to do so) but he feared I, on the other hand, wouldn't stick with it. Unfortunately, I understood his reasoning. I have had us jumping on more than one lifestyle bandwagon in our history together, only to find me or us, not be able to maintain the path, whatever it was. Although, in my/our defence, I think no matter what it was, we still were able to gain knowledge, or strength from whatever changes we made. 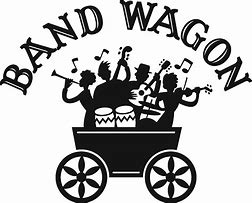 One of the biggest changes came after I took a seminar through my work, called the Phoenix Seminar, which focused around the writings and teachings of Brian Tracy. Frank and I followed the lessons from the course package for many months and it made a great deal of difference in my career and our home life. This was long before the power of positive thinking became a mainstream trope. Frank reminded me of some of those teachings as part of our 'Self Talk' discussions .... 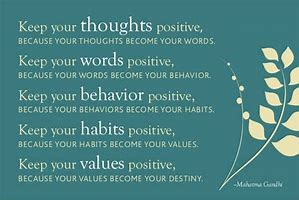 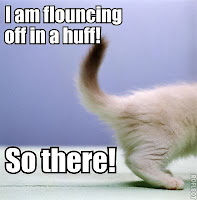 Yesterday was not a good morning. The details I won't share as a long involved backstory is required before it would make sense. However, the gist of it was, I got upset, got out of bed and 'flounced' away to the shower. Frank came after, pulled me in to him and hugged me. Then, in his words, 'I pushed him away' with a comment that I'll paraphrase as me saying 'I can't do this!'. I don't remember physically pushing him away but in retrospect, I certainly did so mentally. He turned and left.

After I showered and calmed down, I sought him out to say 'we need to have a talk'. However, I was devastated to find him visibly upset. Yes, he'd taken those words and interpreted them to mean I didn't want to continue down the ttwd/DD path - in his mind, his biggest fear had become a reality. I had to leave for an appointment but hugged him and assured him that I hadn't changed my mind and we would have a sit down later in the afternoon. 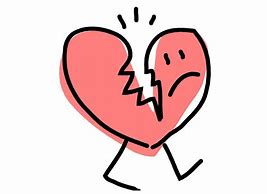 When we finally sat down for our chat, one of the things I asked him was how he thought an experienced HoH might have handled the situation - ie. not letting me get away with such behaviour. He said he didn't know where to go with what happened as he didn't want to upset me further, especially when he was thinking I was abandoning ship. And again, as he often does, he reiterated how we have a lot to learn about how to navigate this ttwd/DD world. In the end, I explained and made a commitment to him that this lifestyle shift was so significant for us, there is no way I would ever 'quit' with merely a comment ... that a full sit down '3 C' discussion would have to be part of it, with the 'Compromise' C being the most important outcome. 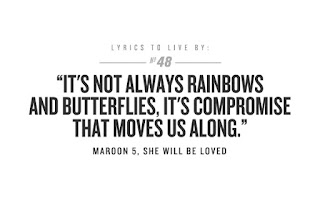 So we are good again ... things are still a little quiet between us but once the weekend is here, we will be able to have some reconnect time.