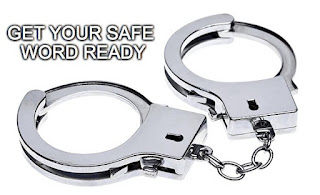 Frank and I grew our BDSM kink (emphasis on D/s) along with our longtime relationship. In the beginning, we read all the books available at the time (or more like I read and then talked to Frank about it all :>)) and yes, they all recommended safewords. However, with our naivete, and no easily accessible, supportive community to consult with, we didn't see a reason to go that route. As we saw it, safewords were for the other people - the hardcore kinky lifestyle people with contracts and such. For us, it wasn't a lifestyle. It was bedroom kink. We thought because we were open and honest in our communication and knew that anything could be stopped by one or the other at any time, all would be ok. However, as we gained experience and became older and wiser, a safeword was put in place. As I was writing this, I talked to Frank about it (because he has the better long term memory :>)) ... and neither of us recall it ever being used.

We adopted a stoplight (red, yellow, green) safeword strategy when we discovered and entered into a DD (Domestic Discipline) lifestyle ... why? because we were moving into uncharted territory. Yes, impact play has always been a part of what we do, but that only happens after I reach some level of sexual excitement. With a DD relationship, we realized there would be times when Frank would be spanking me when I was not aroused at all ... and initially, he would be doing so without any knowledge of my non aroused pain thresholds. He didn't want to 'hurt' me. He also wanted a way to gauge how I was doing. We soon discovered, while I do have a very high pain threshold when sexually aroused, it is much lower when I am not - yes, at those times, I can be a whiny sub :>)).

Since we began practicing a DD lifestyle a little over a year ago, we have only used Red twice and neither instance was any type of dramatic circumstance. The first time was during a spanking where I absolutely could not get my head in the game ... I had been feeling disconnected from the DD relationship and Frank was spanking for reset purposes. However, for the life of me, I could not submit and my mind went to 'just get me the hell out of here. I can't do this' and I called 'Red'. The second occurrence was when Frank was having to deliver a discipline spanking (as posted here). He does not spank in anger so although his moment of anger had passed, he was still greatly disappointed with my behaviour and warned me if he did spank, I was going to get a blistering. I told him to go ahead and I would use our safeword if and when needed. It was needed :>))

Safety is a priority in any relationship where there is an element of risk ... be that mental, emotional or physical risk. No matter where you are on the kink continuum, if there is any chance of mental, emotional or physical distress, having a safeword strategy is the best way to ensure a safety net is in place. I've use the word strategy deliberately a couple of times here, as discussions should not only include the 'what is our safeword', they should also the whys and wherefores of it's use.

Here's a link you're interested in other posts about Safewords, or follow the badge below to go to the SWC's project Tell Me About Dominance and Submission.

By NoraJean at April 07, 2019
Email ThisBlogThis!Share to TwitterShare to FacebookShare to Pinterest